Tens of thousands of people have been killed as Yemen’s brutal war enters its sixth year with no end in sight. Saudi bombs from air raids have killed or injured thousands of children, who are also on the brink of starvation in one of the worst humanitarian crises of our time. Besides, Yemeni peoples’ courageous 5-year resistance against the US, Zionist regime, British, and Saudi-UAE enemies has presented to the world a model of steadfastness against oppression and arrogant powers. To speak more about this aggressive war Mirat Al Jazeera has interviewed activists Randi Nord and Carla Ortiz.

Randi Nord is an independent American journalist and co-founder of Geopolitics Alert where she covers U.S. foreign policy in the Middle East with a special focus on Yemen. Nord believes that Western media outlets tend to gloss over the fact that the Ansarullah-led government controls Yemen’s most populated areas or imply that they do so by force and threats of violence. The truth is that Ansarullah never would have been able to hold onto power for so long without the will of the people.

She adds that President Saleh al-Sammad was an excellent diplomat who spent considerable time reaching out to tribal leaders and listening to their concerns in Yemen’s poorest areas like Hodeidah, where most people don’t even have running water or electricity. He did his best to lift Yemeni society up and this has continued under President Mahdi al-Mashat with the Yemen Vision 2030 plan. All of Ansarullah’s success stems from its grassroots support. That’s why they’ve been able to build Yemen’s military technology and defence systems as well, Nord concludes.

The Saudi-led coalition, Riyadh, in particular, clings to its airstrike campaign and targets civilians, in her opinion, because that’s been its strategy throughout the entire war and has no support on the ground. Even in the southern provinces where the Saudi coalition has set up its improvised capital, the UAE is the real power player. Violence and terror are all the Saudis have.

Nord goes on to say the UN panel of experts concluded in 2018 that the coalition’s use of precision-guided smart weapons proved that it was intentionally targeting civilians. They believe that by terrorizing civilians, they can get the public to turn against Ansarullah. She asks, ”the Saudis believe this strategy will work because they use violence and terror to rule over their populace at home so why not do the same abroad?”

The blockade has completely devastated every aspect of Yemeni society, according to the US journalist. The healthcare system cannot function. Hospitals have been forced to close. Public sector workers, which in Yemen include nurses, teachers, engineers, and sanitation workers, have had to seek alternate sources of income because there are no salaries. According to the United Nations, a child dies every ten minutes and 22 million Yemenis (out of 29 million) require urgent humanitarian aid.

Nord maintains that Saudi Arabia has used the blockade to weaponise famine and disease. In 2017, Yemen suffered a globally unprecedented cholera outbreak infecting over one million people and killing thousands. Medieval diseases have made a comeback. To top it off, she adds, the sea blockade gives Riyadh the green light to restrict the flow of imports and aid into the country. It’s common for Saudi Arabia to prevent ships from docking in Hodeidah to unload aid even after the Saudis have inspected the vessels themselves. This is all part of their strategy to suffocate Yemeni society and deteriorate the material conditions for average Yemenis in the hopes they turn against Ansarullah.

Finally, Nord noted to Mirat Al Jazeera that the UAE is at war with Saudi Arabia, its coalition partner, in Yemen’s southern provinces. Not long ago, the two almost faced off over control of Socotra and clashes between each country’s mercenaries are common in Aden. ”It is my belief that the UAE wants to incorporate Socotra into the Emirates. They have already cooperated with the US to open airstrips and military bases here.”

For her part, Carla Ortiz a Bolivian actress, philanthropist and activist who support the Yemeni people’s resistance against the aggression says there have been too many players and the impact of all the big empires playing specific roles have somehow driven the Yemenis to fight back and stronger. ”We have seen a much defiant people and determent to protect and defend their people with dignity. It has been so heartbreaking to see children die every 7 minus due to treatable diseases or dye of hunger or just lack of clean water,” she believes.

Ortiz considers that Ansarullah being a  powerful pole of resistance in the region, has become a military threat and as a result also an influence over the technological power of Saudi Arabia. She goes on, ”these 5-year war has been hurting Yemen in every possible way and its people. So, Ansarullah aligned their revolutionary goals, with the fundamental demands of the Yemeni people and its opposition to any foreign intervention especially Saudi Arabia. Now the international community understands that maybe the most effective way to have peace and end the war in Yemen is through peace talks of Saudi Arabia with Ansarullah.”

In the same context, Ortiz warns that Yemen’s resistance operations have caused huge damage to the economy and oil of Saudi Arabia. “I think it was calculated that it cut off exports of over 5 million barrels of refined oil. This alone will have to bring both opposing forces to the table to look for a faster solution for all parts,” she notes.

In Ortiz’s opinion, the US should not be involved in this kind of wars and its people have demanded a stop to it. Yemen war has been very silenced by our western media and finding out such direct involvement has also put Yemen and the innocent victims as a priority.

Saudi Arabia’s retaliatory airstrikes have led to the loss of so many innocent lives, especially children and civilians that are caught in the middle of the fire, Ortiz notes. She adds, ”It is insane when you see how much of their infrastructure has been destroyed along with schools hospitals, universities and thousands of lives. It is just heartbreaking no matter o what side of the conflict you are children should never be victims.”

Ortiz points out that it is frustrating to see the hypocrisy of the international community over this blockade. ”I honestly believe that the resilience of the people has driven them to survival mode. I still communicate with many of them and I can tell you that they have managed to keep their dignity and patriotism intact regardless of the inhuman condition in which they are living,” she comments.

She doubts a soon reopening of Sana’a international airport and regarding the pro-coalition mercenaries’ withdrawal from Yemen, Ortiz hopes this would help some of the people in the area live better days in the near future. ”May peace arrive soon with the end of the war,” Ortiz prays. 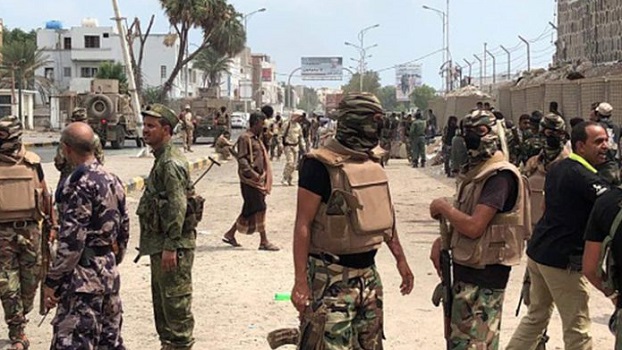